As soon as we saw Ozzie’s cheeky smile on the Claddagh Rescue Instagram page, we knew we had to meet him. A few days later we met him with Rima and he was bundles of energy, bounding around the fields. We weren’t sure he would settle with us in the car ride home but luckily after a few minutes he fell asleep on my lap. Ozzie has fit right in with us here and loves his new life in Dun Laoghaire. He couldn’t contain his excitement during his first trip to the sea and after a nervous paw in to start he soon bounded in after his ball. 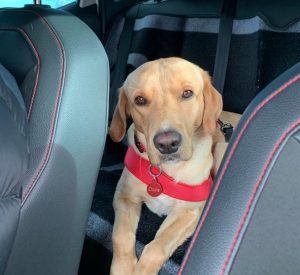 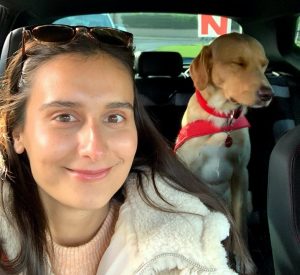 He loves jumping into the sea, fetching his ball, chilling out on the sofa and, most of all, eating anything and everything he can find (he knows just how to make it look like he’s not eaten in days whenever we are eating a snack). He always seems to find the comfiest place in the apartment, and won’t move (unless everyone goes to another room, at which point he is up like a shot). Ozzie craves attention and loves having his belly stroked (ideally by the two of us) and won’t hesitate to put his paw on us to tell us he wants some more fuss. He definitely thinks he’s a small dog and bounds into the bedroom first thing in the morning to say hello and then goes onto find a comfy spot- often right on top or in the middle of us. 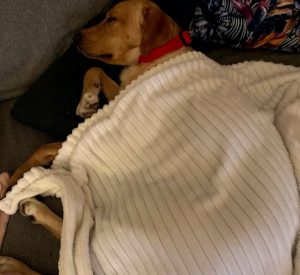 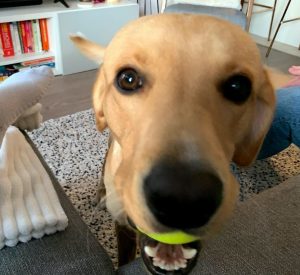 Despite being in lockdown we’ve managed to take him on a few trips in the car and he loves sticking his head out the window to catch a breeze. His first day trip out of Dun Laoghaire was to Bull Island- he couldn’t contain his excitement as he bounded over the sand dunes and across the beach. 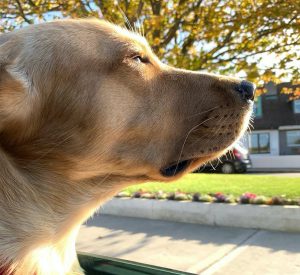 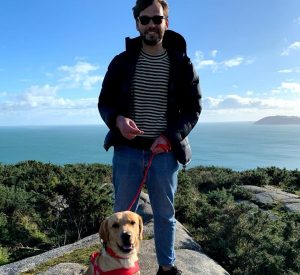 Since having him, we have had Ozzie’s DNA tested – he is mostly Labrador, but 10% English Springer Spaniel – which explains his bouncy nature.  He’s a quick learner and has already mastered how to lie down and stay on command. He is still getting used to walking on the lead, but he seems to love everything else. Ozzie is such a lovely, friendly dog and his obsession with fetching the ball and love for life is infectious, lighting up our lives during these difficult times. 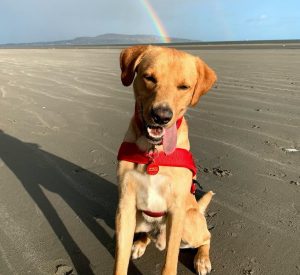 Rima does such amazing work with all of the dogs at Claddagh Rescue, and we are so pleased that we have Ozzie.  She’s kept in touch with us since we’ve adopted Ozzie and has continued to be so helpful with any questions we’ve had. Thanks for introducing us, Rima, and thanks for all of the work you do! The dogs you rescue could not be in better hands and are so lucky to be in your care.