So myself (Alan) and my partner Kerry are dog lovers and general animal lovers all of our lives and have had dogs throughout both our childhoods.

We decided in September 2018 after moving in to a new home that we wanted to adopt. Staffys always had a special place in my heart so they were no.1 on my list.

Whilst searching facebook adoption and pound pages I had the idea that it had to be male staffy no more than 2-3 years old..

Pretty quickly I came across Rima’s page “Claddagh Rescue” via “Save the staffys Ireland” facebook after they were sharing her gorgeous dogs.

Obviously house checks have to be done before dogs can be fostered or adopted but being in Waterford and Claddagh in Cavan it wasn’t really possible for Rima to do a check herself.

So I contacted the WSPCA and Andrew (through talking to Rima) agreed to check our house and garden was suitable and secure. Once the ball was rolling the excitement was unreal! 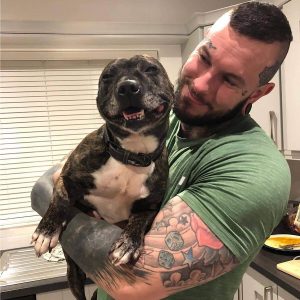 A few days after our house was checked we organised to head up to Claddagh on Sunday 21st October to check out the 2 boys we were interested in. Over 3 hours of drive up and too many tolls to count we eventually arrived just after it got dark and were invited inside Rimas house (two of us buzzing at this stage).

The first dog we met was too big for us (more amstaff or something taller) but was such a nice dog, just very very hyper as he was still very young. And the second dog was absolutely cracked (we did love the 2 dogs don’t get me wrong, but we knew they wouldn’t be suitable with our jobs, the house etc as they were so boyish they would probably be a little destructive. And we wouldn’t have a dog outside.

Rima asked us to view one more dog that she’s had for a long time and thought would suit us (Jasmine, who was actually previously in a pound, then went to Claddagh Rescue..was fostered but then the family moved to England and had to give her back.. so she had been through so much stress and hardship in her life).
When Jasmine came in there was an instant bond and she wasn’t as hyper as the other 2 dogs given she’s older and a girl I guess. Kerry looked at me so that decision was made😂 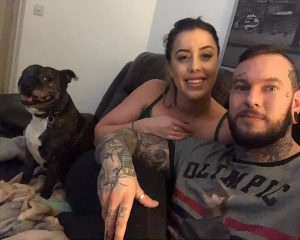 And the rest is history.

Now Jasmine has a few words of her own;

“Furst off I want tu tank Rima for being a gooder hooman and minding me wen I need it. One day out of nowhere a toll hooman with drawings on his face and bodi and a smoll hooman with the purty hair came and before I knew it we was all in de car and we got sausages and nuggets before the long journey to a cool new doggo house. It was so nice.

Day talk different here but i still knows de important words like “who’s a gud girl” (dats me) and “sit” and “paw” (i has 4 paws). 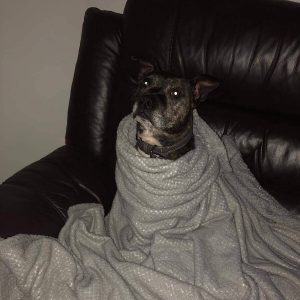 Anyway, I am such a hapi doggo now with my new hoomans. I have 2 beds, sofa with all of the blankets but I like the hoomans bed. It’s very big and I can sleep where I want (I done a pee on the bed twice and toll hooman was angry but smoll hooman done a laff. She’s fun).
I gots to go. It’s Sunday and dat mean pizza. I dont like olives ok!
Woof”