This time last year, 7 year old Beau became our very first family dog. I almost said pet, but the gerbils did get in ahead of him, and thankfully he hasn’t managed to get a hold of them yet. So far so good for Fido and Fern. We became a three pet household in a matter of months! 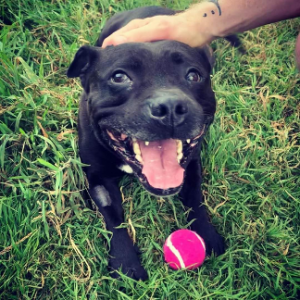 That was not the plan, but we were on the lookout for a Staffy and the minute we spotted Beau’s smiling face on Claddagh  Rescue’s facebook page we knew we needed to get up to Cavan quickly to snap him up.

That is exactly what we did and he welcomed us in with open paws, by jumping into the front seat of the car. It was love at first sight for my sonEvan and I, and after a walk and a chat with Rima we were certain that we had struck gold with Beau. He was the perfect fit for our family. 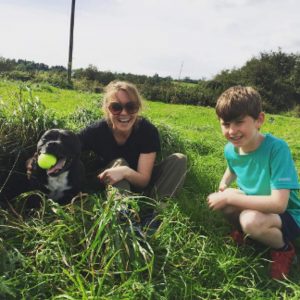 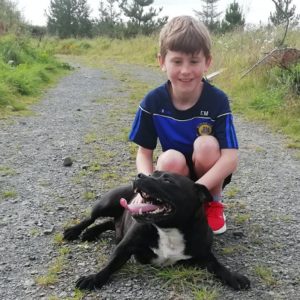 Within days he had his spots marked out – on the couch, on Evan’s bed, on my chair and on any part of the floor where my feet were placed. You name it, he claimed it, and so it has remained.

He is the best friend and family companion you could ask for, except when he goes rolling in the fox poop, that bit we could probably live without! 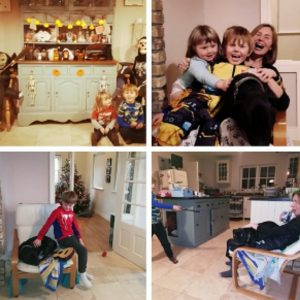 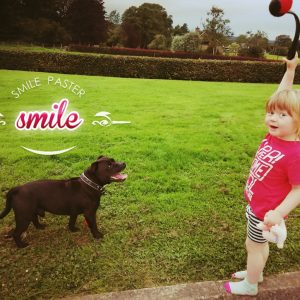 His penchant for red kong balls is keeping them in production at this stage I’d say. If it isn’t red and rubber, he ain’t chasing it. Many happy hours are spent in the garden at this craic. Long live Kong balls. 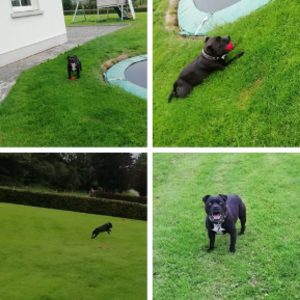 He was a great companion for us all during lockdown and I don’t think he minded the extra attention every day either.

Hard to get a good shot of Beau as he is a bit camera shy but he is a very handsome boy indeed.

A massive thank you again to Rima for all she does in Claddagh Rescue. It really is a home from home for dogs, whilst they wait to find their new family. Keep up the great work Rima. 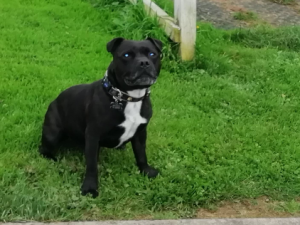